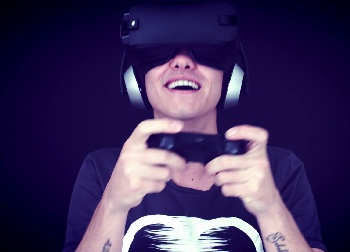 My guess is that you arrived here because you are interested in Virtual Reality (VR) gaming. But aren't you tired of all the hype and hoopla surrounding this great new technology?

We strip Virtual Reality down to it's bare bones so you can understand what it is, what you need to get started, and we also recommend some fun and interesting VR games and apps for you to try.

WHAT IS VIRTUAL REALITY? 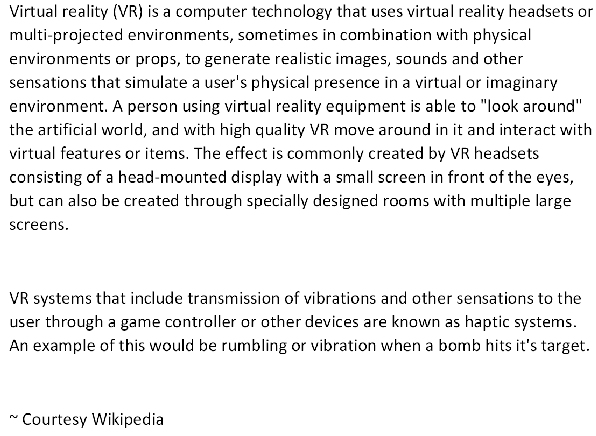 Now, on a practical level, VR is best experienced by wearing a special high-tech VR headset (Goggle-like glasses) + headphones + processor unit. All are attached to a computer (or PlayStation console) with wires or wirelessly.

Special VR hand controllers are recommended to convert your real-time commands into your gaming actions in the VR setting. (Although many of the VR games can be played with standard gaming joypads). 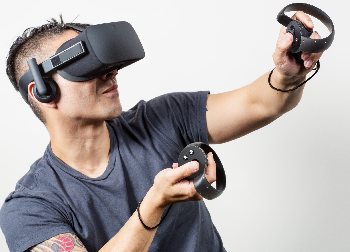 One of the two "Big Boys", this is the lower-priced VR Kit. Some reviewers claim that for the price, the Rift S is the best VR system available today. While others favor the more expensive HTC Vive below, all agree that Oculus Rift S is one of the finest.

The Rift S is Oculus' latest PC-powered VR system, with game-changing Touch Controllers, improved optics with higher resolution, Insight Tracking, and Passthrough+ (which allows you to look around your "real-world" space without removing your headset).

Good honest reviews and great prices! Amazon affiliate link provided at no added cost to you. Read all the fine print and make sure your computer is up to snuff before ordering.

Oculus has recently released it's "next generation" VR setup, called the Oculus Quest. This system requires NO PC, and NO WIRES. Now, you might think that a VR system not hooked up to a PC would lack power, but reviews have been great for the Quest!

Because you don't need a PC, you can take this device almost anywhere! But the best feature is that it is totally wireless. This eliminates "cable panic" and delivers a worry-free, liberating VR experience.

Oculus Quest has Room-scale Insight Tracking, Touch Controllers which translate your movements into VR action, and audio built right into the headset.

Best of all, the Oculus Quest is surprisingly affordable for what you get:

No PC
No Wires
No Limits

The HTC Vive is arguably the best home-version VR gaming system on the market; but it is also the most expensive. Use it seated or up and about in a 15' X 15' Safe Gaming Zone. The experience is simply awesome!

This bundle includes the headset, two wireless hand-controllers, two base stations and a link box to connect it to your computer. A highly recommended add-on is the Deluxe Audio Strap, which adds earphones to your headset.

Read all the fine print and make sure your computer is sufficient before ordering.

Although it does not have quite the technological power of the high-end Oculus or Vive, the PSVR nonetheless delivers a “full VR” experience at a mid-range price. It will still "blow you away"!

PlayStation VR has a “Social Screen” feature, where your guests get to see what you are seeing through your headset, displayed on a connected TV.

The Amazon affiliate link below leads you to a convenient pack with the PSVR headset bundle, required camera and PlayStation Worlds, which includes 5 games to get you started on your new adventure.

The budget VR systems work with your Smartphone.

The Samsung Gear and Google VR kits work by clipping your Smartphone into the front of the VR headset.

For Samsung cell phone owners, the Gear VR is an affordable and easy way to explore virtual reality.

Amazon affiliate link below for more info and reviews:

Google has created an intriguing but easy and affordable introduction into the world of VR. These systems have lots of fun and interactive low-cost games and apps to try.

Tip: Serious gamers will be more satisfied with one of the Big 3 VR systems above.

Google Cardboard- Yep, this headset is actually made of cardboard, with a price tag to match. It works with most Android phones and iPhones with screen sizes from 4 to 6 inches.

Google’s Daydream View is a step above the Cardboard. It is made of fabric rather than cardboard, and comes with a motion controller to transfer your gestures into the apps and games.

Which Smartphones work with Daydream View? Find out here.

The Daydream app must be installed on your Smartphone in order for the VR system to work.

We have a Google Daydream View Headset and highly recommend it as a low-cost introduction to the VR  experience. Read about our experience with the Daydream and some helpful advice. 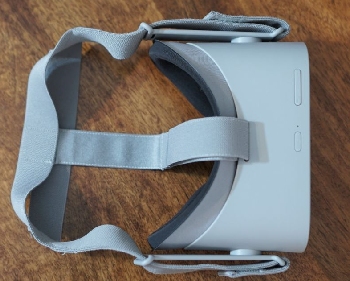 The Oculus Go is a mid-level Virtual Reality Headset which does not require wires, a PC or a smartphone in order to operate. (called "Standalone") The VR environments are downloaded to the unit via it's own Qualcomm Snapdragon mobile platform.

A great VR Headset at an affordable price:

What to Try with Google Cardboard and Daydream

There are a growing number of apps available on the Android and iOS app stores, from 360-photography to games and documentaries.

10 Google Cardboard apps and games to try... it's not just games.

Cardboard: Google’s own collection of VR demos for Cardboard is a great place to start.