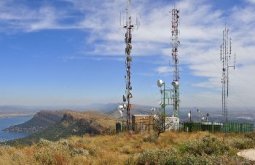 Confused about Internet access? Don't know exactly the difference between Wi-Fi, 3G and 4G? And what the heck is LTE?

You're not alone. Many other folks just like you don't have a clear grasp on how these systems work.

But if you want to get in on the action by purchasing smartphones, tablets or laptops, it's important for you to understand the differences between Wi-Fi, 3G and 4G before you buy.

If you have high-speed Internet (or broadband) service in your home, via cable or DSL, then you've probably also got a "router", which does just that... it routes the broadband signal to the separate Internet devices in and around your home.

This routing of Internet service can be done "hardwired" (such as a desktop PC which is plugged directly into your router via Cat 5 cable). But most routers also issue that internet connection "wirelessly" throughout your property. This is called Wi-Fi.

You have probably already been using your home Wi-Fi if you have downloaded an ebook directly to your Kindle Fire without using your desktop; or checked emails on your laptop without "plugging it in".

A Wi-Fi network is very limited in range, like to a few hundred yards. Your wireless Internet signal (Wi-Fi) is not likely to reach further than your driveway or the next door neighbor's house. A public Wi-Fi Hotspot might reach for only a couple of blocks.

Cell Phone with no Cell Service?

Did you know that you can call, text and surf the 'net on your smartphone without cell coverage?

It's true. As long as you have a newer generation smartphone and solid wi-fi Internet service, you do NOT need a cell tower signal at all to use your mobile phone. You can do it all via wi-fi! And it doesn't count against your carrier's data usage limits!

TIP: Activate the "Mobile data is off" button on your smartphone while you are at home and using wi-fi only. This prevents ANY usage of that expensive voice, text or data allotment you are allowed by your carrier each month. When you go back on the road, simply set "Mobile data is on" back on your phone. With some smartphones, you can set to automatically switch back and forth. 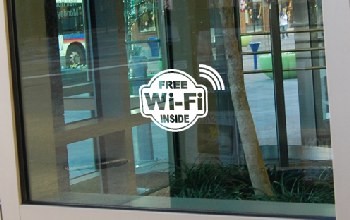 A Wi-Fi hotspot can be set up intentionally to provide Internet access to visitors or customers, such as you might find in an Internet cafe, motel or in an airport terminal.

Or, an "unintentional" Hotspot can exist anywhere a wireless router is up and running. This is why you should always assign a secret password to your home Wi-Fi. If it's not password protected, anyone within range can use your Wi-Fi, and actually gain access to the data on your computer.

Make sure you keep a password sentry in place for your home wireless network!

What Does "Wi-Fi" stand for?

Answer: Nothing! Wi-fi is just a "made-up term" by the Wi-fi Alliance to label their wireless technology.

This is the wi-fi logo, often displayed by businesses to tell customers there is a wi-fi hotspot on the premises. (Such as in the photo above).

Okay, so now you understand the limitations of Wireless Internet Networks (Wi-Fi). What if you want to surf the 'net on your tablet while on a road trip; or check your emails once you reach your destination? If there's no Wi-Fi hotspot available, that means no Internet. What can you do?

The answer is 3G service; which is provided by cellphone towers. You might think of 3G as "long-range Wi-Fi". The Internet access is provided by the cellphone carriers instead of your cable or DSL. And the 3G coverage area can be statewide or even larger.

But, follow me here, your mobile device has to be "3G enabled" in order to access the 3g Internet signal. Some mobile devices are Wi-Fi only, unable to link to 3G (Amazon's Kindle Fire and Nook Color by Barnes & Noble are examples).

Some mobile devices are set up for both Wi-Fi and 3G service, but you will likely incur a monthly fee for the 3G. Carriers like Verizon Wireless, AT&T or Sprint provide 3G service plans for many devices.

Read the fine print before buying, so you know exactly what you are committing to. Do you really need 3G service? It might be worth it if you travel a lot, but a waste of money if you do most of your web surfing at home.

By the way, 3G stands for "third generation" wireless cellular technology. 4G (fourth generation) is starting to pop up more and more, as well. It is more advanced and much faster than 3G.

You may also be seeing "LTE" here and there in references to 3G and 4G. LTE stands for “Long Term Evolution”. 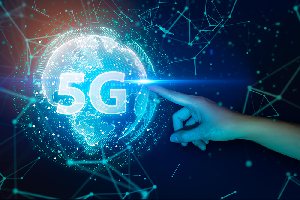 So what is on the horizon for mobile networks? 5G service, which will be a significant improvement over 4G. 5G will provide speeds up to 30 times faster.

What will that mean for you?

When will 5G become widely available?

Cellphones with 5G connectivity are expected to hit the market in 2020-2021.